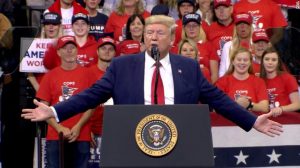 The White House is launching a new effort to slow the speeding Democratic impeachment push, but its noncooperation strategy is being constantly thwarted by a daily stream of explosive secrets being spilled behind closed doors on Capitol Hill.

Current and former officials are painting an ever more damning picture of a wider than originally perceived scheme by President Donald Trump and his crew to pressure Ukraine that they warned could amount to a trampling of US law.
Vice President Mike Pence launched a new effort Tuesday to bolster White House hopes of stalling the House inquiry long enough for Trump to turn public opinion against it. He refused to turn over documents related to Trump’s now notorious call with the President of Ukraine on July 25.
But White House officials are becoming increasingly frustrated at revelations from the closed-door hearings. Given that there is no presidential counsel in the room, they struggle to frame a defense, learning about almost daily bombshells only from news reports, CNN reported on Tuesday.
And the possibility that former national security adviser John Bolton — who may have little incentive to shield the President who recently ousted him — could soon be called to testify will do little to ease the impression among White House officials that they are flying blind.
Fresh testimony in recent days has elevated the crisis for Trump. It has appeared to expose an off-the-books effort to perform an end run around US foreign policy officials with political appointees that predated his notorious phone call with the President of Ukraine in which he sought dirt on his possible 2020 foe Joe Biden.
On Monday, former senior White House Russia aide Fiona Hill testified that she had tried to raise the alarm about possibly illegal activity — and had been encouraged to do so by Bolton.
A senior State Department official, George Kent, testified Tuesday that he’d been told by a supervisor to lie low after complaining about Rudy Giuliani’s meddling in Ukraine, according to Democratic Rep. Gerry Connolly of Virginia, who sits on the House Oversight Committee.
More peril looms for the White House on Thursday, when Gordon Sondland, the US ambassador to the European Union, is expected to tell lawmakers that a text he sent to a colleague insisting there was no quid pro quo offered to Ukraine was dictated by the President himself.
The most worrying development so far this week for the Trump team is that Hill’s stunning mention of Bolton raises the possibility that a possibly disgruntled former national security adviser, who was forced out under a cloud, may have an incentive to offer testimony that could damage his former boss.
Trump’s rather worn defense of his actions exemplifies the depth of his problem. The Ukraine story has outpaced the President’s attacks on a whistleblower who first exposed the story and his defense of his “perfect” call with Ukraine’s President. Trump’s allies are bemoaning what they say is a lack of due process in the Democratic impeachment investigation — but they often seem unable to effectively parry the damaging tidbits leaking out of depositions.

The President stuck to generalities on Tuesday.
“We just hit the greatest economy we’ve ever had. ‘Let’s impeach the President’ — isn’t that a good idea?” Trump said during an event with the Stanley Cup champion St. Louis Blues.
“I wouldn’t worry about it, fellas. I wouldn’t worry about it,” the President told several senators in the audience, referring to impeachment — raising questions as to whether he understands the seriousness of his plight.
Democrats are expressing deep satisfaction with the pace of their three-week-old investigation so far.
And in a sign that GOP attacks on their process are not yet biting, House Speaker Nancy Pelosi said Tuesday that she had no plans yet to bow to demands for a vote formally authorizing the impeachment proceedings.
House Intelligence Chairman Adam Schiff laid claim to “dramatic progress” Tuesday in digging out the truth about Trump’s call with President Volodymyr Zelensky on July 25.
And Democratic presidential candidates — in a grave moment at the start of their latest debate in Ohio — reflected polls showing growing public support for investigating the President.
Former Vice President Joe Biden blasted Trump as “the most corrupt” President “in modern history and all of our history.”