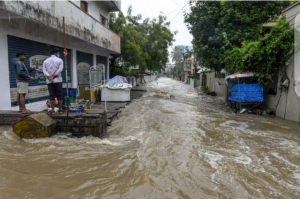 Afrinity Production unveil the death of at least 12 people in incidents of wall and house collapses amid record rains in southern India, officials and media reports said.

Aljazeera said, three more people, an old couple and their grandson, were killed when their house collapsed during the downpour in a nearby village also on Tuesday night, local media reported.

Daily life has been thrown out of gear across parts of Hyderabad as roads are flooded and vehicles washed away in several neighbourhoods.