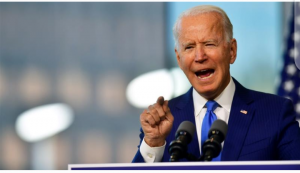 Afrinity Production make known to you the Biden’s blast on Trump after the death of Ruth Bader Ginsburg, Trump says he will name a nominee this week as Senators plan pre-election vote.

Aljazeera said, US Democratic presidential candidate Joe Biden has urged Senate Republicans not to vote on any candidate nominated to the Supreme Court as the November election approaches, calling the plan by his rival, incumbent President Donald Trump, an “exercise in raw political power”.

Biden was speaking on Sunday, the day that a second Senate Republican voiced objections to Trump’s plan to vote quickly on a replacement to liberal Justice Ruth Bader Ginsburg, who died on Friday. Such an appointment by the president, if approved by the Senate, would cement a 6-3 conservative majority that could influence American law and life for decades.

“Voters of this country should be heard … they’re the ones who this Constitution envisions should decide who has the power to make this appointment,” Biden said in Philadelphia. “To jam this nomination through the Senate is just an exercise of raw political power.”

“I appeal to those few Senate Republicans, the handful who really will decide what happens,” Biden added. “Please follow your conscience. Don’t vote to confirm anyone nominated under the circumstances President Trump and Senator [Majority Leader Mitch] McConnell have created. Don’t go there.”

Trump on Saturday promised to nominate a woman and said he will make his nomination this week, naming federal appeals judges Amy Coney Barrett and Barbara Lagoa as possible candidates to fill the vacancy created by the death of liberal icon Ruth Bader Ginsburg on Friday.