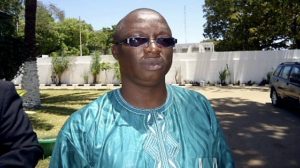 *Minister Samateh told lawmakers last Saturday during the debate on the extension of state of emergency that the Ebola funds were wasted and equipment which were said to be procured never reached the country.*

But Sey, who was the minister of health during the outbreak of the Ebola crisis, denied this: “The money never came to the ministry of health. It was all handled at the level of the UNDP and the procurement process was also done by the UNDP.We were just handed the materials and everything”.

Sey explained that, when the Ebola escalation was reported in the sub-region, the government put up an Ebola response task force but no money was taken from government because this was around end of year.

“We worked with the UNDP and there was a donor conference in Dakar which I attended with the finance minister and presented our plan. The plan attracted lot of interests from the UN and CSOs who really wanted to help,” he said.

He said the plan was then taken to the UN South-South Cooperation platform and the Japanese government decided to fund some of the activities.

“And all those funds came through the UNDP as the middle body responsible to build point of entries in the border villages, procurement of motor bicycles, ambulances, pickup trucks and some equipment including the ones at the airport”, Sey said.