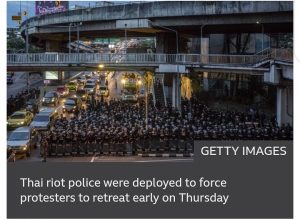 Afrinity Production make known of Thailand’s issuing of an emergency decree banning protests as it clamps down on largely peaceful pro-democracy rallies that have also targeted the monarchy.

In a televised announcement the government said urgent measures were needed to “maintain peace and order”.

BBC said it justified the orders partly on the grounds of some protesters disturbing a royal motorcade during a mass march in Bangkok on Wednesday.

More than 20 people have been arrested including three protest leaders.

The emergency measures came into effect at 04:00 local time on Thursday (21:00 GMT on Wednesday).

Thailand’s student-led democracy movement has been calling for the resignation of Prime Minister Prayuth Chan-ocha. The former army chief had seized power in a 2014 coup before he was appointed as premier after controversial elections last year. The protests have widened in recent months to call for curbs on the king’s powers.

Take A Fascinating Trip Through The Life Of Babah Njie. (Previous Post)
(Next Post) Idris Elba: We can all help solve climate change
Previous Image