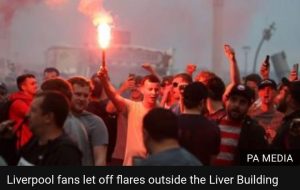 Football fans who were crowded in Liverpool for a second night after their team netted the Premier League title have been asked to leave by police.

A dispersal order was issued around the city centre after groups came out again on Friday to celebrate Liverpool’s first title win in 30 years.

Police and politicians urged Liverpool fans to stay at home due to Covid-19, which was “still a real risk”.

Merseyside Police said the order will be in place until Sunday.

The force said a Section 34 Dispersal Order was issued “following large gatherings in the area this evening”.

“We know a lot of Liverpool fans want to celebrate their Premier League win, but there is a time and a place for this – and this weekend is neither.

“Tonight we have seen masses of people flock to the Pier Head area heightening the risk of spreading Covid-19,” it said.

People took to social media to comment on how people were behaving, about flares being launched at the Liver Building and fireworks being set off.