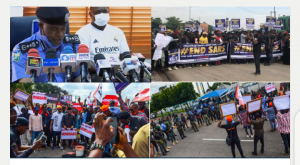 Afrinity Production reliably disclose to you the action taken by the Inspector-General of Police in Nigeria, Mohammed Adamu, in dissolving the infamous subunit of the force, the Special Anti-robbery Squad (SARS).

“The Special Anti-Robbery Squad of the Nigerian Police, otherwise known as SARS, is hereby dissolved across all formations, the 36 state police command and the Federal Capital Territory where they currently exist,” the IGP said on Sunday.

“All officers and men currently serving in the unit are to be redeployed with immediate effect.”

According to channel TV, the police authorities will be announcing new policing arrangements to address the offences of armed robbery and other violent crimes that fall within the mandate of the Special Anti-Robbery Squad later.

Adamu’s announcement followed days of widespread protests by Nigerians demanding scrapping of the unit which had gained notoriety for brutality and human rights violations.

China to test entire city of Qingdao after COVID-19 cases emerge (Previous Post)
(Next Post) If you’re looking around to compare yourself with the guy you are about to read about, you will win.
Previous Image