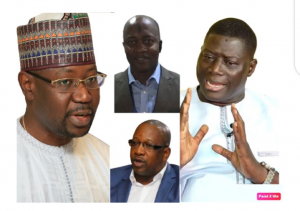 Afrinity Production make known to you the rejection made by Gambian political parties concerning the draft constitution.

According to Standard, at least six political parties have reacted to the sensational rejection of the draft constitution at its second reading at the National Assembly after it failed to secure the backing of 42 members.

A total of 23 lawmakers yesterday voted against the draft constitution after days of debate that will be remembered for its bitter wrangling.

A ‘YES’ vote would have paved the way for a referendum and possibly a new constitution that could give birth to a new Gambian republic.

In his reaction, the spokesperson of the United Democratic Party Almamy Taal said the 1997 constitution was perfectly designed for “a day like this where the majority will want one thing but the small minority will scuttle that process. If 50+1 was the threshold in the 1997 constitution, this constitution would have passed but now everybody has seen it. All the political parties are on one side apart from the APRC and NRP and the MPs that were expelled from the UDP one side making a lot of noise.”

The Gambia Democratic Congress leader, Mamma Kandeh said the decision of the lawmakers who rejected the draft acted based on politics and not national interest.

“It is very disappointing that the lawmakers have rejected the draft. But this is not a surprise to me because, frankly, there is no transition because the government has never taken the reforms very seriously. It is very sad that we have spent D116 million in vain,” he said.

The APRC spokesperson Musa Amul Nyassi said: “When I said I was going to reject the draft constitution I meant it. I am glad some of my colleagues at the chamber have listened and they tried to find out why I came up with that conclusion and thank God when they followed the concerns, they came back to me to say there is nothing that will make them pass this draft.

The leader of the Gambia Moral Congress, Mai Ahmad Fatty said: “As expected, the bill has been rejected by a negative vote of 23, with 3 abstentions. Some 116 million Dalasi just thrown into the toilet by 23 MPs, along with more than money’s worth. The draft will not proceed and the 1997 Constitution rules. I am bereft of words.