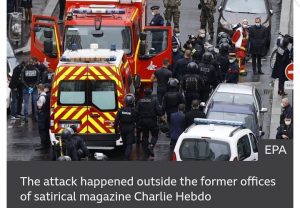 Afrinity Production disclose to you the knife attack in Paris which led to detainment of seven people in connection with the attack.

A man armed with a meat cleaver wounded two people in the attack on Friday.

The main suspect, identified as an 18-year-old man of Pakistani origin, was arrested near the scene. Police said six others were in custody and being questioned.

The attack is being treated as a terrorist incident.

Interior Minister Gérald Darmanin said it was “clearly an act of Islamist terrorism”. He said police had underestimated the threat level in the area.

The attack came as a high-profile trial was under way of 14 people accused of helping two jihadists carry out the 2015 attack on Charlie Hebdo, in which 12 people were killed.

What do officials say happened?

According to BBC, in their interview with state broadcaster France 2 late on Friday, Mr Darmanin described to then stabbing as “a new bloody attack against our country, against journalists”.

“It’s the street where Charlie Hebdo used to be. This is the way the Islamist terrorists operate,” the interior minister said.

He said he had ordered security to be stepped up around synagogues this weekend for Yom Kippur, the holiest day in the Jewish calendar.

The main suspect has not been named, but Mr Darmanin said he arrived in the country three years ago “as an isolated minor” of Pakistani nationality.

The minister added that the suspect was not known for being radicalised, but had a previous arrest for carrying a screwdriver – and gave no details.