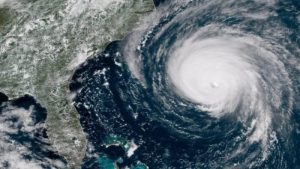 The US Hurricanne Center said that the powerful storm that had threaten south-eastern coast of The US has grown to category 4.

Hurricane Dorian has maximum sustained winds of nearly 145mph (225km/h). The Storm is expected to grow even stronger, its center potentially crossing the Bahamas before skirting Florida’s east coast early next week. Reports show that a florida has declared a state of emergency and residence have been asked to stock enough food, water and medication which can last at least a week.

Tourist are said scrambling to leave the Bahamas before the international airport is closed.

Forecasters warn Dorian could be the region’s worst storm since category five Hurricane Andrew killed 65 people and destroyed 63,000 homes in 1992.

By the middle of next week, forecasters expect Dorian to shift eastwards, putting the coasts of Georgia and South Carolina at risk.

“Dorian is anticipated to remain an extremely dangerous major hurricane while it moves near the north-western Bahamas and approaches the Florida peninsula into early next week,” the NHC said.

The NHC warned that Dorian could cause “incredibly catastrophic damage”.

Residents of Georgia and South Carolina have been told to keep an eye on the forecast as Dorian churns towards the US coast.

Dorian is expected to drop up to 12in (30cm) of rain on the coastal US, with some areas getting as much as 18in. Tides in the region are already at some of their highest levels of the year, owing to a naturally occurring event.