The Gambia’s Sad Truth About The November 11th Coup! 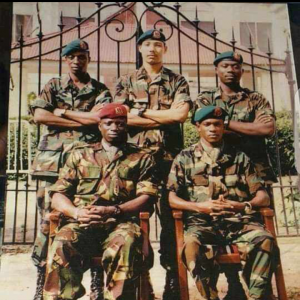 It was July 1994, when Yahya Jammeh (red beret), Edward Singhateh and Sana Sabally celebrated their military coup. Following the coup, its leaders banned all opposition parties and the Armed Forces Provisional Ruling Council (AFPRC) was established as the ruling government of the Gambia, and the 1970 constitution was suspended. The leader Yahya Jammeh and other coup organizers step in further to gain public and political support while holding back all opposing parties on their intervention. 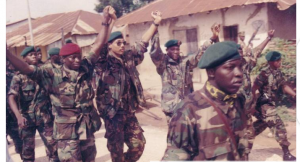 The coup frontiers also took in control the national radio stations and put forward harsh restrictions on the press to prevent the broadcasting of opposition’s point of view. These harsh restrictions led to the imprisonment and exile of several Gambian journalists who expressed anti-coup sentiments. It also affects some West African Journalism and led to their deportation some of which are on charges dating to colonial rule and with politically charged biases.

The violations of human rights were not only on the journalists and vocal protesters of the coup: Yahya Jammeh’s most controversial policies combined the re-establishment of the death penalty, which was mostly given for political opponents and attempted coup leaders. With these acts, Jammeh and his allies were able to legitimize the coup, the new ruling government and the PPP, both internally and internationally. Leading up to the September 1996 election, Jammeh transformed the AFPRC from a ruling military body into the Alliance for Patriotic Reorientation and Construction (APRC), and stand as the nominee for the new party. He won this election, partially due to the lack of major opposition parties, thus legitimizing his government and fully stand as the President of The Gambia.

Today, The Truth, Reconciliation and Reparation Commission continued to hear from high-profile statement and information from members of Yahya Jammeh’s former military junta. The entire details on the executions that took place on 11 November 1994 were explained by protected witnesses and some alleged that the current national security presidential adviser was there when close to two dozen soldiers were executed.

Posted in Featured News | Comments Off on The Gambia’s Sad Truth About The November 11th Coup!