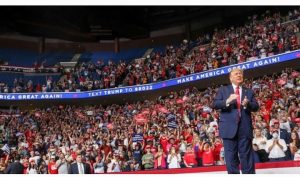 Friends and family gather around the coffin of Jakelin Caal, a seven-year-old girl who died after developing a high fever while in the custody of US Customs and Border Protection. (Previous Post)
(Next Post) Suspended acting chairman of the Economic and Financial Crimes Commission (EFCC) of Nigeria, Ibrahim Magu has been released from police custody.
Previous Image