UDP Youth president tells Gambian VP Touray ‘Youth must not be used as tools for exploitation.” 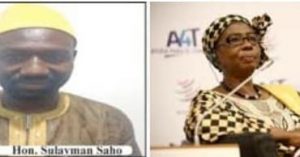 Sulayman Saho urges Vice President Isatou Touray to be watchful of what she say and to exercise high regard for others, saying she mistreated and misapply the occasion instead of calling for multi angle approach to contain corona virus.

The vice president was restated during the food distribution calling on young people to take part in the unloading of the food items as source of income earning for them.

This triggered not only Saho but a good number of young people and bothered Gambians. Although she stand her ground that, her “comments were taken out of context or misunderstood.”

*Mr. Saho said if the government fails to address the challenges that young people are facing then it has fail in its responsibility.*

He made recommendations to president Adama Barrow to make a decision about his Vice President’s statements, saying she has vandalized the efforts of the government and putting forward her own political career to become the next president.

*The Central Badibou lawmaker said it is high time for the VP to know and comprehend that the change she is enjoying was done by the youth and not her alone.*