What’s at stake in Supreme Court fight in the US 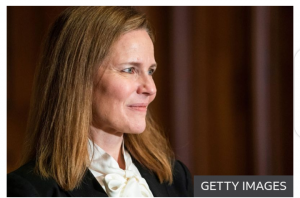 Afrinity Production unveil to you the battle to get Donald Trump’s nominee to the US Supreme Court, Amy Coney Barrett, is now confirmed by the Senate and it begins today. The shifting ideological balance of the court will have an impact in all areas of American life and across the US – perhaps in no place more than Texas.

BBC said, Susan Lippman, a Democratic activist in Austin, Texas, was sitting in her car when she heard the news that Supreme Court Justice Ruth Bader Ginsburg had died.

“I’m not too emotional,” she says. “But I let fly. I was raging and screaming. Pounding the steering wheel.”

Lippman instantly knew the impact that the loss of Ginsburg, a liberal legal icon, would have on the ideological composition of the court. If Donald Trump could successfully replace her with his choice for a justice, it would secure the conservative tilt of the top US judicial body for a generation.

So, a week after Ginsburg’s death, Lippman and her friend, Debbie White, were heading to protest outside the office of Senator John Cornyn, a Texas Republican senator who has pledged to confirm Ms Coney Barrett.

White says a 6-3 conservative majority in the court could directly attack Democratic Party priorities like government-managed healthcare and access to abortion services.

“I’m afraid that it’s going to do away with some very important things like the Affordable Care Act, which would be just awful because that would bother so many lives,” White says. “All the women’s rights and women’s health issues are a goner on a conservative Supreme Court.”

New local lockdown rules for England are due to be announced later. (Previous Post)
(Next Post) China to test entire city of Qingdao after COVID-19 cases emerge
Previous Image