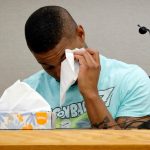 Joshua Brown teared up as he testified last month in the murder trial of a former Dallas police officer convicted of shooting and killing their neighbor in his own home.