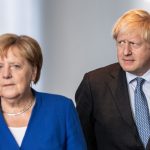 Boris Johnson is poised to give up on Brexit deal talks with the EU after speaking to the German chancellor, Angela Merkel, with a No 10 source briefing that an agreement looked “essentially impossible not just now but ever”, my colleague Rowena Mason reports.

They also claimed she said a deal would never be possible unless Northern Ireland stayed in a customs union.

But Labour called it a “cynical attempt to sabotage the negotiations”.

Shadow Brexit secretary Sir Keir Starmer said Mr Johnson “will never take responsibility for his own failure to put forward a credible deal”, and called on Parliament to “unite prevent this reckless government crashing us out of the EU”.

The latest developments came after leaks from the European Commission showed major concerns from the EU about the UK’s Brexit plan.

Mr Johnson sent new proposals to Brussels last week, with the PM urging the EU to enter detailed talks to “thrash out” any objections.

The main focus was to replace the so-called backstop – the policy negotiated by Theresa May and the EU to prevent a hard border returning to the island of Ireland – which has long been a sticking point with Parliament for agreeing a deal.

But after the phone call, the No 10 source accused the EU of being “willing to torpedo the Good Friday agreement” – the peace process agreed in Northern Ireland in the 1990s by refusing to accept Mr Johnson’s proposals.

The government argues allowing Stormont to approve part of the PM’s plan is key to respecting the so-called “principle of consent” in the Good Friday Agreement, but Irish Prime Minister Leo Varadkar has warned it could actually undermine that principle by giving one party in Northern Ireland a veto over what happens to the country as a whole.