A call for progress and national recognition

Dozens of Americans celebrates Juneteenth, A call for progress and national recognition 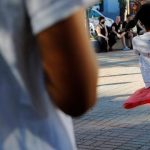 In the past years of celebrating Juneteenth, the holiday which usually celebrates the day in 1865 that all enslaved Black people learned they had been freed from bondage, would be marked by African American families across the nation with a cookout, a parade, a community festival, a soulful rendition of “Lift Ev’ry Voice and Sing”.

The way it is marked in 2020 is different, as the coronavirus ravishes Black America disproportionately, as economic uncertainty wrought by the pandemic strains black pocketbooks, and as police brutality continues to devastate Black families, Juneteenth is a day of protest.

For many white Americans, present protests over police brutality have heightened their knowledge of Juneteenth’s significance.

“This is one of the first times since the 60s, where the global demand, the intergenerational demand, the multiracial demand is for systemic change,” said Cornell University professor Noliwe Rooks, a segregation expert.

‘Friday’s celebrations was marked from coast to coast with marches and demonstrations of civil disobedience, along with expressions of Black joy despite of an especially traumatic time for the nation.’

And like the nationwide protests that followed the police-involved deaths of Black men and women in Minnesota, Kentucky and Georgia, Juneteenth celebrations are likely to be remarkably more multiracial.