a seven-year-old girl who died after developing a high fever while in the custody of US Customs and Border Protection.

Friends and family gather around the coffin of Jakelin Caal, a seven-year-old girl who died after developing a high fever while in the custody of US Customs and Border Protection. 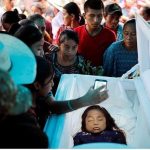 Many claims that the death of Jakelin Caal and Felipe Gomez could have been averted.

Felipe Gomez Alonzo, age eight, and Jakelin Caal, age seven – both from Guatemala – died shortly after being detained by US Customs and Border Protection (CBP) at the US-Mexico border.

“Available records make clear that Jakelin and Philippe both suffered terrifying and painful deaths that could potentially have been prevented by timely access to paediatric medical care,” said Fiona Danaher, a paediatrician at Massachusetts General Hospital.

Danaher appeared before the Homeland Security Committee of the House of Representatives, where Democrats are pursuing an investigation of a policy of the administration of US President Donald Trump: separating migrant children from their parents. Felipe and Jakelin were among six minors who died in US border patrol custody between September 2018 and May 2019.

Caal “died of septic shock which, because it went untreated over many hours, cascaded into multiple organ failure,” Danaher said. Alonzo died from “untreated influenza complicated by pulmonary haemorrhage in the context of bacterial pneumonia and sepsis”, she said.

By detaining children in crowded conditions without adequate access to medical care, the CBP is “perpetuating systems that place children at risk for medical neglect”, Danaher told the committee. And the emergence of COVID-19 adds new risks.