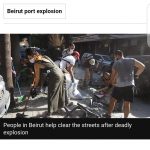 Inhabitants in Beirut have put forward their anger at the government over what they say was ‘negligence’ that led to Tuesday’s huge explosion in China.

According to BBC, President Michel Aoun said the explosion was caused by 2,750 tonnes of ammonium nitrate kept unsafely in a warehouse.

Dozens have accused the authorities of corruption, neglect and mismanagement.

The blast killed at least 137 people and injured about 5,000 others, while dozens are still missing. A two-week state of emergency has begun.

“Beirut is crying, Beirut is screaming, people are hysterical and people are tired,” filmmaker Jude Chehab told the BBC, calling for the people responsible to face justice.

Chadia Elmeouchi Noun, a Beirut resident currently in hospital, said: “I’ve known all the time that we are led by incompetent people, incompetent government […] But I tell you something – what they have done now is absolutely criminal.”

On Wednesday, the government announced that a number of Beirut port officials were placed under house arrest pending an investigation into the explosion.

The country’s Supreme Defence Council insisted that those found responsible would face the “maximum punishment”.

For now, Amnesty International and Human Rights Watch have called for an independent investigation into the blast. In a statement, HRW said it had “serious concerns about the ability of the Lebanese judiciary to conduct a credible and transparent investigation on its own”.