Mai says if APRC should take him to court, they will be left with no money. 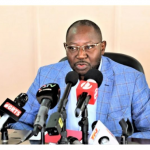 Replying to APRC’s blast that they are going to take legal actions against him if he fails to prove his allegations of corruption against them, GMC leader, Mai Fatty said he strongly stands by his claims that the party unconstitutionally benefited directly and indirectly from millions of taxpayer funds.

The former Interior minister told The Standard yesterday: “I stand fully behind my statement that based on audit reports, the APRC illegally benefited directly and indirectly from millions of taxpayer funds throughout its 2 decades of existence.”

“There is evidence that 22 million Dalasis of public funds was transferred to APRC Mobilisation Account Number at Guaranty Trust Bank. These are monies belonging to Gambians that were unlawfully transferred through the Accountant General’s Department on the orders of Yahya Jammeh to finance APRC. These illegal funds that APRC unlawfully benefited from, should be recovered by the Government and returned to the public treasury. I maintain this position and call on the government to recover these funds without delay,” he said.

According to Standard, Fatty said there are more revelations in the audit report and as soon as he is ready with a forensic evaluation of the entire report, he will produce more results for the APRC to refund the state.
On APRC’s threat of a legal action against him, Mai challenged the party to sue him without delay.

“I urge them not to delay this matter, and to do so with utmost agency. I am absolutely confident that this would be a very costly decision they would regret. It will lead to their declaration of bankruptcy and their eventual elimination from the political process for good. I am eagerly waiting for their suit, and I hope the APRC will not chicken out on this threat. Gambians should know that this is an empty threat the APRC dare not implement,” he added.

Fatty further said the best way out for APRC is to apologise to Gambians and rehabilitate their ways.

Posted in Featured News | Comments Off on Mai says if APRC should take him to court, they will be left with no money.
Tags: APRC and Mai Fatty