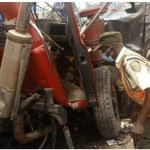 According to the spokesperson of the agency, Babatunde Akinbiyi, the accident was caused by over speeding on the path of the truck driver who in the process collided with the Corolla car coming from the opposite direction.

The TRACE spokesperson discloses that the injured victims were taken to Ilaro General Hospital while the death bodies deposited at same hospital mortuary.

“According to eyewitness account, the truck was on top speed when it suddenly lost control due to break failure and collided with the car that was coming from the opposite direction.

“The accidented vehicles have been deposited at Ewekoro Divisional Police Command, including the truck driver and the motor boy.”