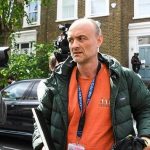 British Prime Minister Boris Johnson has backed his chief adviser Dominic Cummings, amid a backlash of calls for Cummings to step after it was made known that he travelled to Durham from London while the country was on lockdown and everyone had been told to stay in their houses.

Johnson told a news conference on Sunday that he believed Cummings had acted “responsibly and legally”.

“I think that what they did was totally understandable,” he added. “I think any father, any parent would frankly understand what he did and I certainly do.”

Cummings travelled 250 miles (400 kilometres) from London to his parents’ home in Durham, in northeast England, with his wife and son as he was coming down with COVID-19 symptoms at the end of March.

Britain’s lockdown, which began on March 23, specified that people should stay at their primary residence, leaving only for relevant local errands and exercise. Anyone with coronavirus symptoms was told to completely isolate themselves.

The Sun newspaper reported late on Sunday that Johnson was going through a cabinet upset over his support for Cummings, a divisive figure most known for his role in the campaign to take the UK out of the European Union.

“He (Cummings) cannot stay,” the paper quoted an unnamed minister as saying. “There has to be some contrition from Boris too or he will spend the next ten weeks having to answer questions about it all. This is not a bubble story. Real people are furious because they have been doing the right thing and isolating.”

The Sun report came after some Conventional MPs joined opposition calls for Cummings to step down.

“Dominic Cummings has a track record of believing that the rules don’t apply to him and treating the scrutiny that should come to anyone in a position of authority with contempt,” tweeted Conservative politician Damian Collins. “The government would be better without him.” He added