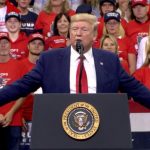 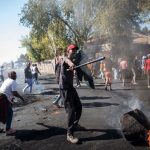 Anti-foreigner attacks in Johannesburg has triggered violence and massive looting of South African-owned brands in Nigeria.

Angry protesters set fire to many entrances leading into a busy mall housing South African retail store Shoprite and looted groceries and toiletries from the supermarket in Lagos, Nigeria’s commercial center.
Another outlet belonging to the chain and one owned by South African mobile company MTN were vandalized in Ibadan city in southwest Nigeria on Tuesday despite appeals from the government for peace.
MTN Nigeria also sent messages to its employees to work from home in view of the attacks on some of its facilities.
On Wednesday, police fired teargas to disperse a horde of rioters gathered outside many South African-owned outlets in Surulere, a bustling district in Lagos.
South African president calls for arrest of those involved in xenophobic attacks
Nigeria’s Minister of Information and Culture Alhaji Lai Mohammed said Nigerian investors own significant stakes in South African companies operating in the country and the majority of their employees are also Nigerians.
“President Muhammadu Buhari has dispatched a Special Envoy to convey to his South African counterpart, President Cyril Ramaphosa, his concerns and also interact with his South African counterpart on the situation,” Mohammed said.
Nigerian music stars Burna Boy and singer Tiwa Savage have also weighed into what has escalated into a diplomatic row between both countries.
Savage canceled an upcoming performance in late September. She said the xenophobic violence provoked the decision.

“I refuse to watch the barbaric butchering of my people in SA. This is SICK. For this reason I will NOT be performing at the upcoming DSTV delicious Festival in Johannesburg on the 21st of September. My prayers are with all the victims and families affected by this.” said Tiwa Savage

Looters make off with goods from a store in Germiston, Johannesburg on Tuesday.
South Africa is facing criticism over a fresh wave of violence against African immigrants and foreign-owned businesses.
Angry mobs looted, burned and vandalized shops, properties, and vehicles, after violence flared Sunday. South Africa police say five people were killed and 189 people allegedly involved in the violence have been arrested. Many foreign-owned stores were targeted in the violence.
Xenophobic and anti-immigrant attacks are not new in South Africa. Demonstrators forced hundreds of foreigners from their homes and looted some businesses in Durban in April.
They claimed that foreigners had taken jobs that should have been filled by locals.
In 2017, violent anti-immigrant protests broke out in the capital Pretoria and in 2015, several people were killed, and thousands fled after xenophobic attacks across the country.
SOURCE CNN NEWS