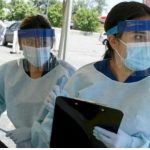 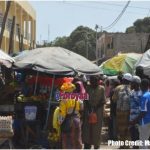 Risk may loom as submission with COVID-19 measures goes down. This disease is real and a killer as declared by the World Health Organization (WHO) as a global pandemic.

COVID-19 was initially confirmed in the Gambia on 16th March 2020 and presently the country’s COVID-19 status stands at 1 death, 9 recoveries and 11 positive cases.

In spite of coming up with a State of Public Emergency and limitations coupled with the numerous sensitization campaigns on the pandemic, Gambians from the onset of the escalation conformed with the guidelines.

To ascertain the submission with the guidelines set aside to contain the escalation of the disease give rise to this medium to visit some of the public places and see the level of concurrence with the precautionary measures put in place.

*At Latrikunda Sabiji Market, this reporter observed that physical distancing rules on public gathering and the use of masks have not been implemented; that people could be seen in numbers without masks and hand washing is also neglected by many at market entrances.*