Corruption at the Ministry of Health 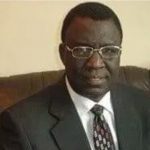