Democratic nomination for 2020 secured in US upcoming Election 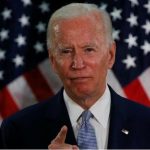