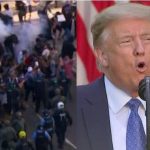 President Donald Trump on Thursday shared a letter on Twitter that points to the peaceful protesters who were forcibly send away from a park near the White House on Monday evening as “terrorists.”

*The letter from veteran attorney and former Trump lawyer John Dowd appears to be addressed to former Secretary of Defense James Mattis and rebuts Mattis’ Wednesday statement castigating Trump’s response to the nationwide protests after the death of George Floyd at the hands of a Minneapolis police officer.*

“The phony protesters near Lafayette were not peaceful and are not real,” Dowd’s letter claimed, without citing any evidence. “They are terrorists using idle hate filled students to burn and destroy. They were abusing and disrespecting the police when the police were preparing the area for the 1900 curfew.”

CNN has reached out to the White House for further comments on the description of the George Floyd’s protesters as “terrorists.”

The letter drew outrage from the Modern Military Association of America, a nonprofit organization for the LGBTQ military and veteran community.

“Promoting a letter that labels American citizens peacefully exercising their First Amendment rights as ‘terrorists’ is an egregious breach of his oath to preserve, protect and defend the Constitution of the United States. Now more than ever, it is absolutely crucial that Trump be held accountable for his reckless actions.”