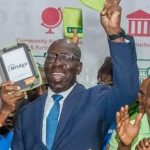 As the success story of the Edo BEST initiative continues to resonate across the length and breadth of the country and beyond, the Edo State Universal Basic Education Board (SUBEB), recently played host to a delegation from Ekiti State whose objective was to understudy the Edo BEST initiative and its success story in order to replicate same in Ekiti.

The delegation which was led by Mr. Familoni F.A, Director, Science, Technology and Mathematics, Ministry of Education, Ekiti State, were taken on a tour to public primary schools in the State for a first hand assessment of the impact, practicality and effectiveness of Edo BEST. Amongst the schools visited were Adesuwa primary School and Oghobaye Primary School, in Oredo and Ikpoba Okha LGAs respectively.

Welcoming the delegates, the Executive Chairman, Edo SUBEB, Dr. Joan Osa Oviawe, noted that the whole journey began when the Edo State Governor, His Excellency, Godwin Obaseki, decided to re-enact the tenets of basic education in the State in a bid to provide a solid education model for pupils of public primary schools in Edo State.

According to Dr. Oviawe, “The pillars of Edo BEST have helped greatly in improving basic education in the State. The Teacher Professional Development programme has been greatly improved upon as our teachers have been trained in the used of modern teaching techs and also equipped with mobile computer gadgets and smartphones to aid the teaching and learning process. So far, over ten thousand, five hundred (10,500) teachers have been trained in digital pedagogy and other modern teaching techniques with more than 450 education managers trained as well.”

Dr. Oviawe also stressed on the fruitful partnership between the State Government and the communities hosting Edo BEST schools as about 11,628 School Based Management Committee (SBMC) members have been trained so far.

Speaking, a field officer from Ikpoba Okha, Mrs Erhabor Osasumwen who covers 20 schools, stressed that her duty as a Learning and Development Officer involves mentoring and supporting teachers to achieve the desired results. According to Mrs Erhabor, “Through the help of field officers Edo BEST is able to sensitize the community on the need to send their children to school and also attain quality and standards”

Responding, the leader of the delegation, Mr. Familoni F.A., noted that they were satisfied with the level of professionalism displayed by the teachers in public primary schools in Edo State. According to Mr. Familoni, “Even schools in the rural areas have the same Pattern of delivery both in teaching and learning activities”. He emphasized that they are happy to be in Edo State and are willing to replicate Edo BEST in Ekiti State.

The leader of a UBEC TV documentary team, Mr Ossom Ossom, who was privy to be in attendance, stressed that Edo state caught the attention of UBEC, through the success story of Edo BEST. “Edo State was chosen by UBEC to showcase the achievements of UBEC across the 36 States in the country and the FCT as a result of its success story with the Edo BEST scheme”, Mr Ossom noted.

The Edo State Government under the leadership of Governor Godwin Obaseki is advancing and transforming the basic education sub-sector to meet with global standards and over two hundred thousand (200,000) pupils of public primary schools in the State are currently benefiting by this initiative.

Photo Caption: Delegates from Ekiti with Edo BEST teachers and pupils during the school tour in Edo