First Lady of the Gambia 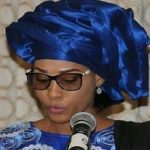