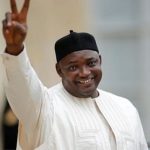 The resent Global Peace Index (GPI), which ranks 163 independent states and territories according to their level of peacefulness, has named The Gambia as the 12th most peaceful country in sub-Saharan Africa and 60th in the world.

Build by the Institute for Economics and Peace (IEP), the GPI is the world’s leading measure of global peacefulness. The writers say the report presents the most comprehensive data-driven analysis to-date on trends in peace, its economic value, and how to develop peaceful societies.

“The GPI covers 99.7 per cent of the world’s population, using 23 qualitative and quantitative indicators from highly respected sources, and measures the state of peace across three domains: the level of Societal Safety and Security; the extent of Ongoing Domestic and International Conflict; and the degree of Militarisation,” it stated.
The reported rated Ghana(3rd)), Sierra Leone (5th), and Senegal (6th) as being more peaceful than The Gambia but rated us above Rwanda (14th), Guinea (16th), Guinea-Bissau (21st), Mauritania (27th), Mali (39th) and Nigeria (40th).

*It named Iceland, New Zealand and Portugal as the most peaceful countries with Iraq, Syria and Afghanistan as the least peaceful.
The report which is the 14th since IEP started compiling the global peace index, noted that economic problems have left The Gambia vulnerable to further deteriorations in peacefulness.*

“With a youth unemployment rate of over 40 per cent, public dissatisfaction and migration have been on the rise. In addition, the country has recorded a rise in police brutality, particularly in clashes with anti-government protesters. However, the opening of the Farafenni bridge over the Gambia River in early 2019, reconnecting the Casamance region in Senegal with the rest of the territory, has eased tensions in the region and led to a de facto truce between the Senegal army and separatist groups. Senegal’s level of internal organised conflict has, therefore, improved and The Gambia has had improvements in political instability.”