Ibrahim Magu has been released from police custody. 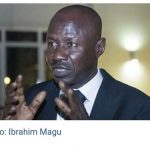