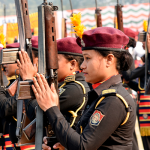 India’s top court has ruled that all women army officers are now eligible for permanent commissions, allowing them to be in commanding roles.

The ruling means that all women officers will now be on par with men when it comes to promotions, ranks, benefits and pensions.

The Supreme Court rejected the government’s plea to overturn the Delhi high court’s order on the same matter.

The ruling has been hailed as a “great leap” towards equality in the army.

Many serving and retired officers had been campaigning for this. Women at the moment are inducted into the army through the Short Service Commission (SSC) and don’t qualify for a permanent commission – which allows an officer to serve a full tenure.

So women are initially meant to serve for five years, but have the option of extending their tenure. However, they don’t get the same benefits as their male counterparts.

The only exceptions are the army’s legal and education wings, where women officers have been eligible for permanent commissions since 2008.

The government last year agreed to give permanent commissions to women but said this would only apply to those officers who had served less than 14 years, citing physical limitations of older women officers.

“The contentions of centre [the federal government] regarding the issue of physiological limitations and social norms to deny opportunity to women officers is disturbing and cannot be accepted,” Justice DY Chandrachud said while reading out the court verdict.

The government had also argued against appointing women in commanding roles.

“The composition of rank and file being male, and predominantly drawn from rural background, with prevailing societal norms, the troops are not yet mentally schooled to accept women officers in command,” it said.

But the court rejected the argument, saying the “right to equality is a right to rationality”.

Lawyer Aishwarya Bhati, who represented women officers in court, said it was a landmark judgement.

“There was clear discrimination in the army. One officer had served for 26 years without getting the same benefits as men. Now the wrong has been corrected,” she told the BBC.

Lieutenant Colonel Poonam told the BBC that the court’s ruling was “historic”.

“The Indian constitution is based on equality. Denying opportunities to women was against the ethos of the constitution. Now the army will have to frame guidelines that are equal for men and women,” she said.