Iran dissatisfied with US law 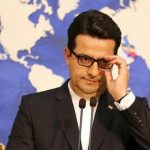