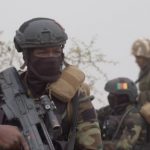 Britain is significantly stepping up its military support in West Africa to help combat the world’s fastest growing Islamist-led insurgency.

Over the past month, British troops have been helping train local forces to fight extremism in the Sahel.

The region, a semi-arid stretch of land just south of the Sahara Desert, has been a frontline in the war against Islamist militancy for almost a decade.

Later this year, 250 British soldiers will join a UN mission in Mali.

It has been described as the most dangerous peacekeeping operation in the world.

In Senegal, a team of around 30 UK soldiers and Royal Marines have been training special forces from a number of West African nations in a US-led counter-terrorism exercise involving more than 1,600 troops.

Maj John House has been leading the British element of the training in Senegal with the focus on infantry skills and counter-terrorism operations.

He said it was in Britain’s interests to get more involved in the region.

“If we don’t act we may find the problems getting closer to our door,” he said. “The more they have a presence in the region, the more we can feel the effect back in the UK.”

Officers from US Special Operations Command Africa, which has been responsible for overseeing the exercise, are just as blunt.

US Maj Chris Giaquinto said the extremists “want to create a safe haven in Africa in order to grow and facilitate attacks, possibly in Europe or the United States”.

There are now multiple extremist groups operating across the sub-Saharan region known as the Sahel. They include ones linked to the so-called Islamic State and al-Qaeda.

Commander Djibril Diawara, of the Senegalese Armed Forces, described the situation as “alarming”.

Over the past year the extremists have spread south from Mali, Niger and Burkina Faso.

The exercise culminated with special forces troops from Cameroon, Morocco and Nigeria conducting a raid on a village to take out an unspecified group of extremists.

Some of those involved have already been doing this for real. Lt Unyine Collins, of the Nigerian Special Boat Service, has spent seven months on the frontline fighting Boko Haram.

He described a ruthless enemy using brutal tactics. “They use suicide bombers, improvised explosive devices, mines, basically they use the same tactics as ISIS,” he said.

It’s an indication of the potential threats that 250 British troops will be facing when they enter Mali later this year.

They may be part of a peacekeeping mission, but the British will be conducting long-range reconnaissance patrols into hostile territory.

Nearly 200 UN peacekeepers have already lost their lives in Mali. France, which has more than 5,000 troops in the country, has also suffered casualties there.

So is Britain about to become mired in another long-drawn conflict?

Brig Gus Fair, commander of the Specialised Infantry Group, insisted it would not become another Afghanistan or Iraq for the British Army.

He said that “we are up front in seeing this as a regional problem for a regional solution”, adding that it involved partnering nations rather than taking direct sovereign intervention.

Nevertheless, the British Army’s peacekeeping mission in Mali will probably be the most dangerous task it has faced since the end of combat operations in Helmand.

The harsh reality is that, so far, Western support – along with international troops and peacekeepers – has been unable to turn the rising tide of extremism in the region.

Posted in Featured News | Comments Off on UK military gears up for deployment in Mali
Tags: Jihad