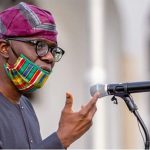 The Lagos State Government on Tuesday said it has seized two houses discovered to be used in decepting inhabitants in the state.

The Special Adviser to the Governor on Housing, Mrs. Toke Benson Awoyinka, disclosed this at a press briefing to celebrate the first year of the Babajide Sanwo-Olu administration in the state

She said the government has set on to take strong procedures to stop developers or agents from cheating members of the public and therefore anyone caught in the act would be charged by the law.

Benson, who is also in charge of the Lagos State Real Estate Transaction Department (LASRETRAD), said her office is presently charging a developer who deceived members of the public in the Ketu area, and also another developer who cheated people in the Mafoluku area.

She said the government has also taken their properties and her office is working on how to sell the properties back to the public. According to her, the profits from the sale would be used to settle the cheated members of the public.

She, nonetheless, called to members of the public to always be a customer of agents and developers who are registered with her agency.

Awoyinka said: “We have successfully reviewed the Lagos State Estate Agency Regulatory Law, Cap L28, Laws of Lagos State, 2015 (“Law”) presently in operation in the state, which provides for the establishment of the Lagos State Real Estate Regulatory Authority.

“The essence of this Law is to regulate real estate transactions in Lagos State by identifying persons eligible to be licensed as Real Estate Practitioners and providing for the issuance or renewal of annual permits.”

She clear out that the authority has the power to maintain a register of Licensed Real Estate Practitioners and the dismissal of unlicensed Estate Agents in the state.