Nigeria and Senegal heading to Bamako in bid to defuse political crisis. 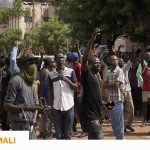