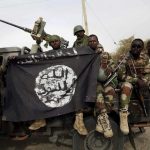 The military in Nigeria today said not less 70 bandits and cattle rustlers have been killed in Kachia forest, Kaduna state after an operation they conducted on Friday.

Military spokesman, Major General John Enenche, said the operation, which combined ground and air offensives, was carried out by troops of Operation Thunderstrike in conjunction with troops of 312 Artillery Regiment and Local Vigilantes.

According to Enenche, military operatives “pursued the bandits through Gidan Maikeri village in Chikun LGA into the forest” and “their location was identified and consequently engaged by Nigerian Air Force helicopter gunships.”

Troops are still going around the forest, searching for the remaining bandits.

“As a matter of security concern, people in this general area should report those with sudden and suspicious injuries to the security forces,” the military statement signed by Enenche said. “This is to ensure that the escapees are mopped up.”

Kaduna, the same as much of northern Nigeria, is presently struggling with an infestation of armed bandits.