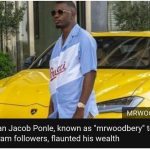 One of the pretentious Nigerian name Olalekan Jacob Ponle was arrested in may after his 29th birthday, he posted a picture on his Instagram standing next to a bright yellow Lamborghini in Dubai.

A month later, the Nigerian, who goes by the name “mrwoodbery” on Instagram, was taken into custody by Dubai Police for alleged money laundering and cyber fraud.

The most famous of the dozen Africans nabbed in the dramatic operation was 37-year-old Ramon Olorunwa Abbas, “hushpuppi” or just “hush” as he was known by his 2.4 million Instagram followers.

‘Police in the emirate say they recovered $40m (£32m) in cash, 13 luxury cars worth $6.8m, 21 computers, 47 smartphones and the addresses of nearly two million alleged victims.’

Mr Abbas and Mr Ponle were both deported to the US and charged in a Chicago court with conspiracy to commit wire fraud and laundering hundreds of millions of dollars gained from their cybercrimes.

The two have not yet been asked to petition and are presumed innocent until court proven guilty.

“I think there’s probably a certain arrogance when they believe they’ve been careful about maintaining anonymity in their online identities, but they live high on the hog and get careless on social media,” said Glen Donath, a former senior prosecutor in the US Attorney’s Office in Washington, DC.