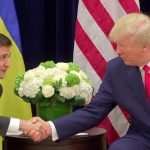 The impeachment battle at Washington over  President Donald Trump’s conduct with Ukraine is intensifying with news of a second whistle-blower while new testimony this week brings the prospect of more stunning revelations to deepen the crisis.

Yet nearly all Republicans, taking advantage of a congressional recess, are staying silent despite more and more evidence that the President used his power to pressure a foreign nation for personal political gain.
Most of the few Republicans who have broken cover are struggling to come up with a logical defense of the President’s actions — but his grip on the GOP is evident in the unwillingness of most to criticize him. And the President’s assault on former GOP nominee and Utah Sen. Mitt Romney — who he branded as a “pompous ‘ass'” is underscoring the price Republicans will pay for rebuking the commander in chief.
Congressional Republicans mostly silent on Trump’s call for China to investigate Biden
Trump is meanwhile hyping rallies this week in Minnesota and Louisiana that are likely to stress his powerful support among his base and will hike new pressure on any wavering Republicans before most of them return to Washington next week.
The weekend’s political exchanges suggested that despite a week of barely believable drama, Trump’s feverish efforts are having some success in stopping any serious slippage in support among Republican lawmakers, especially ahead of any eventual Senate impeachment trial.
But recent developments also sharpen the core questions at stake in the impeachment saga that are critical to the office of the presidency going forward and US democracy itself.
Given the evidence that is already public, the question is becoming — is it permissible for a President to use his power, sometimes even in public — to pressure foreign governments to investigate political opponents before an election?
There is a sense that the history with which future generations will judge today’s leaders is being written every day.