but discrimination towards Africans goes back decades’ 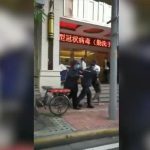