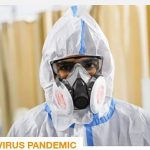 Not less than 8 million people have been reported to have the coronavirus around the world. More than 3.8 million have recovered, while at least 435,662 have died, according to data compiled by Johns Hopkins University.

WHO head Tedros Adhanom Ghebreysus has affirmed that countries need to “stay alert to the possibility of resurgence” as new clusters of cases emerge in Beijing and more than 100,000 cases of coronavirus are reported across the world every day.

The jobless rate unexpectedly held at 3.9 percent over the three months to April – despite a record slump in overall economic output during that period – as firms turned to the government’s job retention scheme to keep employees on their books.

The US, Brazil and the UK have reported the most deaths.
The US has by far the highest number of cases and deaths, but Brazil’s outbreak now the second-worst in the world.

For now, the number of people claiming job-related benefits also increased by a monthly 23.3 percent in May to 2.8 million.