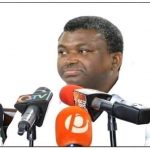 The Gambia has confirmed its first novel Covid-19 case among healthcare workers after a senior nurse catch the virus.

‘The nurse, who worked at the country’s main referral, EFSTH, passed away.’

It is the country’s third registered Covid-19 death since the first case was recorded back in March.

*As said by the ministry of health, the senior nurse, 50, in addition to having had an underlying health condition, was a known diabetic and had also severe pneumonia-like symptoms. A sample was only collected from him after his demise on the 4th of July and a positive test result returned on 5th July.*

For now,, three other cases were recorded which took the country’s toll to 61. Two of them are Belgian couple, both 64, who arrived on SN Brussels flight in late June. The other one is a UN staff of Gambian nationality, 45, who arrived on a WFP-chartered flight from Liberia.

The country at the moment has 341 people in quarantine; 31 active and 8 probable cases.

The ministry said one of the challenges now is escalation of COVID-19 among healthcare workers, while mentioning low staff precautionary measures due to the absent of incentives and the non-payment of allowances, frequent power outages in the PHEOC due to the depenance on NAWEC, as other stumbling blocks.