Gunmen in Niger have killed eight group of aid workers 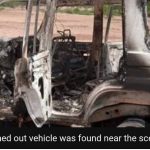