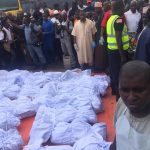 The fire that killed 27 children in a Koranic school in a township east of Liberia’s capital, Monrovia, two weeks ago, was caused by “electrical shocks”, according to an investigation conducted by the Liberian National Fire Service.

Fire Service Director Alex Dixon told reporters they also found a motorcycle parked inside the building “with gasoline in it.”

He did not say if it had a role in the fire.

Words of sympathy, financial and material assistance are still pouring in to console the bereaved families.

The Liberian government has promised to rebuild the school.