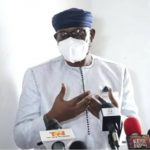 “Allow people to pray in mosques,” says Mai Ahmed Fatty, the secretary general of Gambia Moral Congress as he pleaded on the authorities to re-open mosques for people to have their congregation prayers highlighting that there is no dialectics to it closing down.

He made this known on a press conference on Wednesday at the party’s bureau along Kairaba Avenue.

In March this year, President Barrow make known a state of public emergency disallowing all public gatherings including the closure of religious institutions.

*The GMC leader added he was never in support of the idea of closing mosques as it lacks sense.*

Mai said markets are more populated than mosques yet business is normally in all the markets and are visited by large number of people on daily basis.

He said for the fact that social distancing proceedings are not impose at markets; mosques should be giving the same consideration suggesting a greater focus on providing sanitary materials for usage by worshippers.

*Mr. Fatty cited Senegal as an example where he claimed that one of the biggest mosques in the sub-region Touba remains open.*

“We have more covid-19 cases in Senegal than Gambia. In fact the number of deaths exceeds the number of total cases we have here,” he said. “But you go to Touba the biggest mosque in Senegal is open. That is the biggest mosque. It has never been closed. They perform five daily prayers there; it has not exponential resulted to a large case in Touba.”

“Touba has only three or four cases so far but the mosque is opened every day, and Senegal now the president has come to a decision that if you allow markets to operate you should do the same for mosques also. That’s why President Macky Sall two days ago has eased up and allowed people to go back to the mosques.”