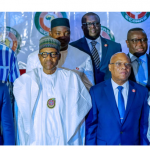 The West Africa bloc ECOWAS on Tuesday rejects a military putsch in Mali and pledged a range of retaliatory actions, including financial sanctions.

Afrinity Production doubtlessly disclose to you the arrest of Mali’s President Ibrahim Boubacar Keita and Prime Minister Boubou Cisse by Rebel Soldiers on Tuesday afternoon following weeks of political tension and protest in the country.

With Certainty from Afrinity Production, it is clear of the dramatic move that followed the seizure of an army base near the capital Bamako in that exact morning.

Mali has been in the grip of a deep political impasse since June, with President Keita facing increasingly devastating demands for him to step down.

The opposition June 5 Movement, named for the date of its first protest, has been channelling deep outrage over a dire economy, perceived government corruption and a brutal jihadist conflict.

The opposition alliance’s anti-Keita campaign veered into crisis last month when at least 11 people were killed over three days of unrest that followed a protest.

In an effort to avoid chaos in notoriously unstable Mali, ECOWAS then stepped in to mediate.

In a statement, the Economic Community for West African States said that its members would close land and air borders to Mali and pledged to demand sanctions against “all the putschists and their partners and collaborators”.

The 15-nation bloc — which includes Mali — also said that it would suspend the country from its internal decision-making bodies.

Keita, 75, is currently being held by rebel soldiers outside of the capital. 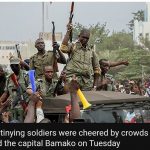 As Afrinity Production posted on their previous post about the protest in Mali over the stepping down of their elected President.

Well the President Ibrahim Boubacar Keïta has resigned, the occurs after being detained by soldiers on yesterday.

Afrinity Production reading from BBC, is made to know that the Mali President in a televised address said he was also dissolving the government and parliament, adding: “I want no blood to be spilled to keep me in power.”

He and PM Boubou Cissé were taken to a military camp close to the capital Bamako, drawing international condemnation.

A spokesman for the soldiers called for “a civil political transition leading to credible general elections”.

Afrinity Production make known to you the visit of Former Nigerian President Goodluck Jonathan to President Muhammadu Buhari in Abuja, the nation’s capital. 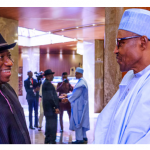 During his meeting with the present President Buhari, Jonathan briefed his successor on the crisis rocking Mali, calling for dialogue to resolve the escalation.

Jonathan was followed by members of the team on the Economic Community of West African States (ECOWAS) Mission to Mali.

Although the ex-President did not grant an interview to State House reporters, a statement issued by the Special Adviser to the President on Media and Publicity, Femi Adesina, indicated that Jonathan proposed dialogue as the way forward.

“We told them that no international organization, including the African Union (AU), United Nations (UN), and others, would agree with their position. We continued to emphasize the need for dialogue,” Jonathan was quoted as saying.

“We told them that no international organization, including the African Union (AU), United Nations (UN), and others, would agree with their position. We continued to emphasize the need for dialogue,” Jonathan was quoted as saying.

The former President added that the Constitutional Court had been reconstituted and inaugurated, while vacancies in the Supreme Court had been filled, thus sorting out the judicial arm of government.

On his part, President Buhari thanked Jonathan for what he called “the stamina you have displayed” on the Mali issue.

Posted in Featured News | Comments Off on Afrinity Production make known to you the visit of Former Nigerian President Goodluck Jonathan to President Muhammadu Buhari in Abuja, the nation’s capital.
Tags: Mali's Protests 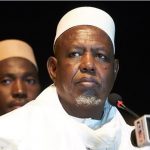