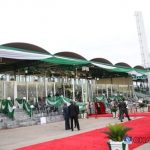 Today is Democracy Day for Nigeria, a day marked by the Federal Government to honour the late businessman and politician, Moshood Abiola, believed to have won the 1993 presidential election.

This is the second time Democracy Day is being celebrated in Nigeria on June 12 since the return of democracy in 1999, as it was previously marked on May 29, to remember the day power was handed over to a democratically-elected government after years of military rule.

It was first marked as Democracy Day on the new date in 2019 after President Buhari on June 6, 2018, announced that the day would hold on June 12 of every year.

Following that decision, the House of Representatives on December 6, 2018, passed the bill seeking to amend the Holiday Act, which was also passed by the Senate on May 16, 2019, after it was put to a voice vote.

On June 12, 2019, none of the former Heads of State and Presidents attended the Democracy Day celebrations held at the Eagle Square in Abuja, the nation’s capital.

In a briefing disclosing Friday as a public holiday, the Minister of Interior, Rauf Aregbesola, commended Nigerians for their dogged determination and sacrifice which led to democratic governance in the country.