Only 1000 people will be able to take part in the pilgrimage and will need to be quarantined after the event. 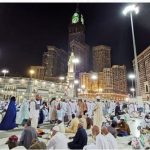