Passengers coming into The Gambia 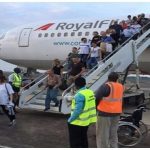