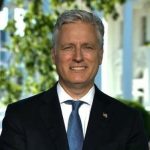 National security adviser Robert O’Brien on Sunday contradicted in an interview on CNN that systemic racism is not happening across the nation’s police forces, stating instead that “a few bad apples” give the suspicion of racism among law enforcement officers.

“No, I don’t think there’s systemic racism. I think 99.9% of our law enforcement officers are great Americans. Many of them are African American, Hispanic, Asian, they’re working the toughest neighborhood, they’ve got the hardest jobs to do in this country and I think they’re amazing, great Americans,” O’Brien told CNN’s Jake Tapper on “State of the Union” when asked if systemic racism was a problem for police agencies.

O’Brien added that there are “some bad apples in there. There are some bad cops who are racist. There are cops that maybe don’t have the right straining.”